On the Balkans, Anjezë Gonxhe Bojaxhiu, is being worshipped in a bizarre manner and to a grotesque extent. To the wider public the late nun is better known by her stage name Mother Teresa. In worshipping her, even her most devout fans can not hide her dark side.

„Peace with a Smile“.

That’s the message on an image on display in the National Museum of Kosovo in its capital Prishtina.

It has been put up in the staircase between the second floor, hosting the museum’s one and only room for exhibitions, and a tiny one at that, and the third floor where another room is supposed to be opened some time in the future.

There just isn’t enough money for the kind of exhibition one would expect in a National Museum.

There was, apparently, for the rather kitschy installation in the staircase.

A local artist portrayed Anjezë Gonxhe Bojaxhiu and the slogan „using 1.2 million staples“, one of the museum’s employees tells me.

Should there ever have been any peace in any of this Albanian nun’s smiles, it must have been as grotesquely distorted, forced and emaciated as in this image.

It is the face of a deeply malicious and ascetic person staring at you, forcing her lips to smile with all the strength she got. 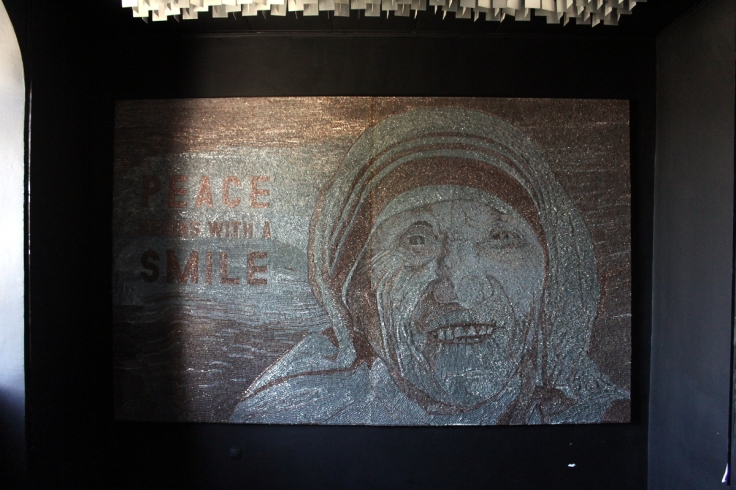 Hansel And Gretel in Kosovo

The statue of the Catholic Saint on Bulevar Nene Terese in the city center doesn’t look that much different.

Bojaxhiu stares at you.

If one didn’t know that this is supposed to be the depiction of someone her admirers consider to be the embodiment of charity and good will, one would assume this to be the statue of a witch abducting a child.

Hansel and Gretel in Kosovo, so to speak.

Or just Hansel, respectively, Gretel already having been eaten by the witch. 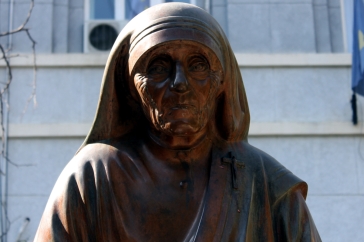 The city’s Cathedral is named after her.

Inside, the Catholic Church puts on display an astounding number of Greater Albanian nationalist symbols.

All this public reverence could lead one to think she was one of the city’s great daughters.

Yet, she wasn’t even born in today’s Kosovo.

Her place of birth is Skopje, capital of today’s Macedonia.

There the rightfully disputed saint is also revered to a great extent, regardless of the population’s ethnicity or religious affiliation.

The museum located in her native home draws a great number of historically obviously underinformed tourists.

For Catholic Albanians, she is Holy or Saint Mother Teresa.

Muslims will speak of her reveringly as Mother Teresa.

What Does Bojaxhiu Have to Do with Sarajevo?

She is fairly popular in Bosnia, too, particularly among the Catholic population, officially labelled Croats.

That she never had anything to do with the country hasn’t kep Sarajevo’s Catholics from putting up a statue of her in front of the Catholic Church in the neighborhood of Marijin Dvor.

Here, she’s holding an understandably crying kid’s head, her other hand holding a rosary. Her malicious smile leads one to believe that she intends to wield the rosary as a weapon.

Presumably one has to be a very devout Catholic in order to enter this building, having to pass this statue.

Everyone else would be reminded of a very mean watch dog and turn around on the spot. 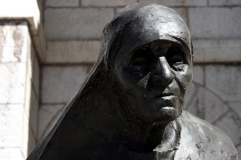 What all of these depictions have in common is that they glorify suffering, rather than trying to overcome it.

With Bojaxhiu, that pretty much nails it.

She, too, glorified suffering. Preferably other people’s suffering.

A nun may not be rich in the strict sense of the word. Yet, compared to those whose plight she supposedly helped ease, the poor of Calcutta, she was immensely rich.

She had a roof over her head, regular meals, clean clothes and, last but not least, access to professional medical treatment.

The latter of which was something that wasn’t guaranteed for the poor that had been taken to the hospices run by her order, the „Missionaries of Charity“.

Calcutta’s destitute, and later those of other places full of poverty and suffering, were taken there to die in huge, dark halls,  lying on cots, regularly denied painkillers and with no medical staff around in the stricter sense of the word.

In their suffering, Bojaxhiu saw something wonderful to teach one about the world and about Jesus. A gift of God.

She made sure her God doled out this gift rather generously.

The millions donated to her order she hardly ever used for her hospices and alter on for her orphanages.

Rather, she founded branches of her order in around 100 countries.

Even medication donated to her, she wouldn’t give to the patients. After her death, substantial amounts of medication were found in her order’s stores, many of them having long expired.

The woman devout Catholics and many others consider „an Angel of the Poor“ glorified poverty on several occasions and never once spoke out against the very conditions that created it.

She preferred sucking up to corrupt dictators such as Baby Doc Duvalier from Haiti. He lived well off the poor of his country.

At the same time, Bojaxhiu was a ferocious activist against abortion or any form of family control.

Thus helping to keep particularly Catholics in developping countries from practicing any form of family control, she helped keep millions of women in poverty and dependence.

On a personal level she is said to have been unpleasant, domineering and mean. There are several reports of her striking her nuns.

(You can read more about the substantial and well documented allegations against Bojaxhiu HERE in detail. The piece also explains how she became an icon of the Catholic Church and beyond.)

Her malice shows on every photo and on every film ever made of her.

Some people just can’t hide who they are.

„Not even her greatest fans manage to turn her into a nice person“, a friend of mine from Sarajevo says.

It is perhaps consoling to think that kitsch can be honest at times. Although not quite voluntarily.

Unfortunately, this won’t do much to end the grotesque worshipping of this holy fraud.

The German original of this piece has originally been published on this blog and the German site  Ruhrbarone.