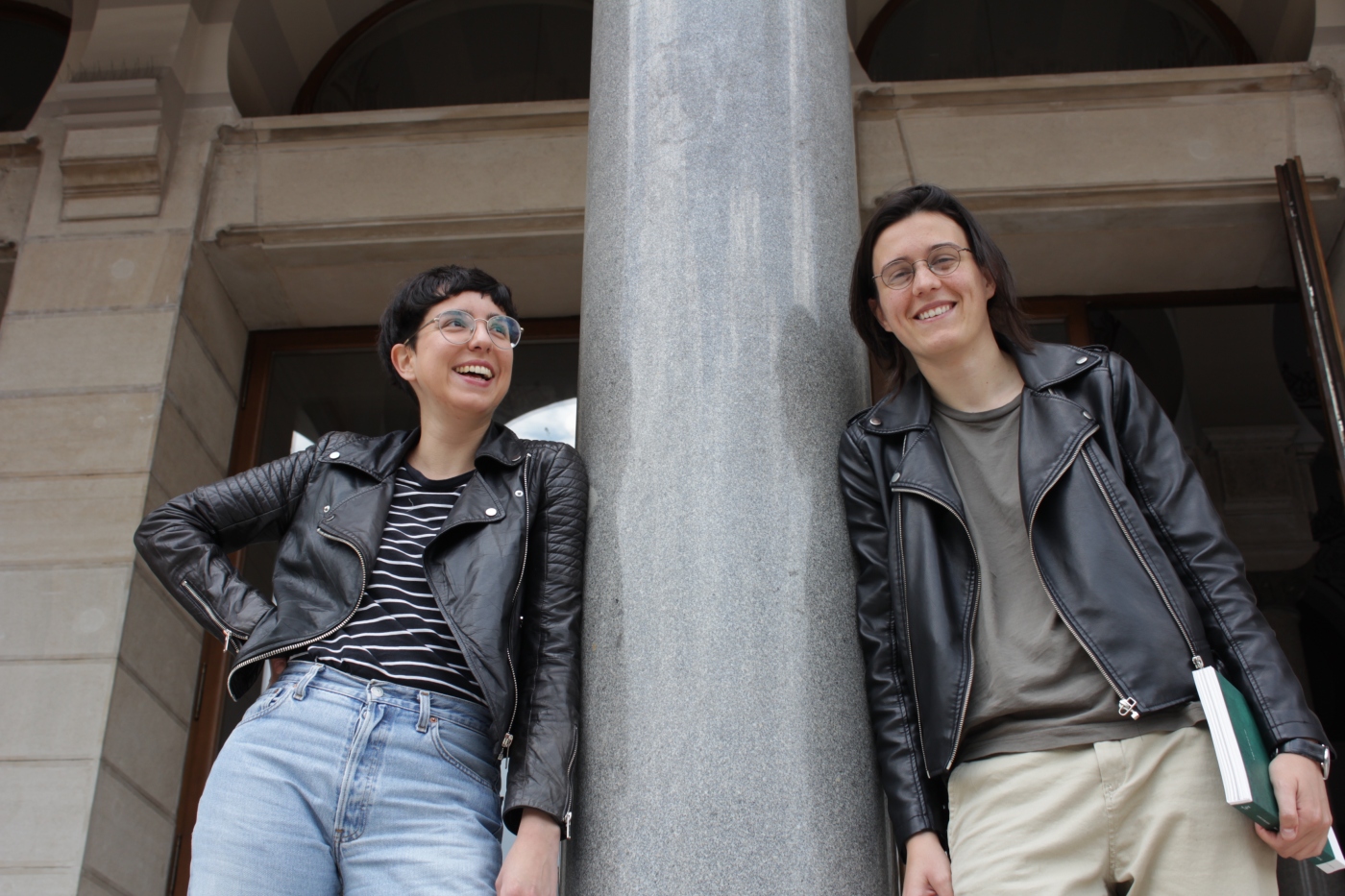 One of my best friends will leave Sarajevo on Saturday – for what could be for good. What will hopefully be her gain will be a great loss to Bosnian society. It just doesn’t know it yet.

I never thought Selma Asotić would ever even think about leaving Bosnia for good.

Neither did she, until recently.

There are mainly personal reasons why she moves to Boston on a long term visa.

She wants to live with the person she loves most.

And she will be participating in a poetry program which will help her develop her art.

In that sense, me and a lot of other people are very happy for her.

At the same time we all shed a few tears, or many, some silent, some not.

I will miss her a lot. Seeing Selma, like seeing Majda, has always been one of the reasons for me to go to Sarajevo as often as I did so far.

We Instantly Liked Each Other

We instantly liked each other when we bumped into each other in Galerija Boris Smoje on my first trip to Sarajevo four years ago. (Has it really been just four years?)

Selma was reading a book and that’s how we started a conversation. Readers know one another, I suppose.

We’ve been good friends ever since and I was more than happy to host Selma and her girlfriend a few days the end of last year in my apartment in Vienna.

We don’t just share a love of books but also of dogs and a passion to make this world a better place. Each in his or her own way, perhaps, but with tons of overlaps.

I wouldn’t be writing a goodbye note on account of our personal relationship.

I write it because Selma’s leaving Sarajevo says a lot about what’s wrong with Bosnia. And because it is a great loss for Bosnian society.

Selma is hard working translator and teaches adults English. She has mastered the language like very few people I know for whom English is their second language.

Selma is also a very talented poet, for all I have heard. I can not be a judge of this as my rather rudimentary knowlegde of the Language Without Name does not permit me to appreciate her work. My sources can be relied upon, however.

Ever since I met her, Selma has been a very hard working person. I have no idea how many hours a week she has averaged in the past years but it must be well above 40.

Still, it was hard even for someone as talented, qualified and hard working as her to make ends meet in Sarajevo.

Wages are low in Bosnia, and unemployment is high.

So there was no perspective for her partner to move to Sarajevo who is also highly qualified. There would have been no suitable job for her.

That left the US as pretty much the only option.

That should tell you something about Bosnia.

The young, the qualified, the hard working Bosnians are leaving by scores. Every day. Literally every day.

A Champion of Womens‘ Rights

A reason why both Selma and I thought for a very long time she would never leave, like so many others do, is that she has been an ardent fighter for a better society in her native country.

Selma has been active in the citizens‘ movement Jedan grad, jedna borba that has more or less successfully addressed issues like the untenable situation of Bosnia’s National Library and the chronic water shortage in Sarajevo. 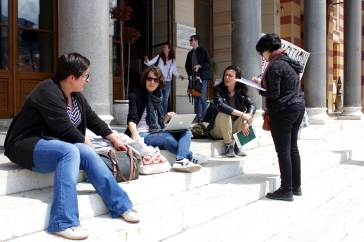 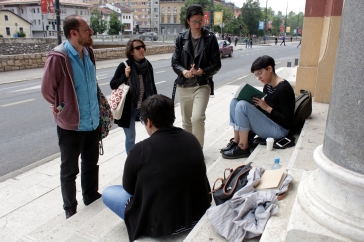 It is a platform on which female authors can publish their works safely, without any undue criticism they often encounter from male editors or colleagues.

This has enabled quite a few authors to have their work published for the first time ever.

To a degree it was Selma’s own experiences that prompted her and Maša (on the left of the title picture) to start the magazine.

„I often catch myself writing like a man would“, Selma said once during a lecture as artist in residence in Vienna.

There is pressure on female authors to conform to standards set by male publishers, authors and critics.

Bona offers a way out.

I’ve been meaning to write a longer story about Bona for ages. Unfortunately, Selma never really found the time to answer my numerous questions.

Not for lack of want. It’s just that if you work 50 or more hours a week and try to run a magazine at the same time, answering a journalist’s questions probably isn’t that high on your priority list.

In A Difficult Spot

Plus, there were always other fights for a better future Selma was engaged it. Some of them I covered as Selma made me aware of these issues.

Some of what I consider to be the best pieces on this blog would not have been possible without her help.

Issues I couldn’t cover as they would have required a lot more time to investigate than I have are women’s rights and LGBT rights in Bosnia. Both topics were and still are very important for Selma. And sadly enough for a good reason.

Not that Yugoslavia was heaven for either women or LGBTs.

But at least the glass ceiling was a lot higher for women than it was in the West. And there was a perfect childcare infrastructure that allowed women to pursue careers of their own.

The bloody demise of Yugoslavia saw a radical backlash in gender roles in almost all of its successor states, and more than in most in Bosnia. And homophobia is on the rise on the Balkans and at times it gets very violent.

Selma is one of the few open lesbians in Bosnia I know. I know quite a few others that dare not come out as they are afraid they may lose their jobs.

So, there is much to be fought for. Not just on account of a better situation for women and LGBTs in and of itself.

Equal rights for both are the best guarantee for better rights for all and for progress in a society one can have.

In her struggle she was quite often at odds with some of the more established feminist organisations.

I suppose I reveal no secret when I write that Selma, for good reasons, considers them to be too middle class.

Needless to say she opposes nationalism of any kind which didn’t quite endear her to some victims‘ organisations in Bosnia who use their position to firmy embed nationalist narratives in Bosnian society.

Who’s Left to Fight For A Better Bosnia?

With Selma goes another Bosnian who could help make Bosnian society become fairer.

People who are willing to commit themselves to political struggles outside the official and notoriously corrupt political system are getting scarcer and scarcer.

The resistance to nationalism, bigotry and corruption is losing its mouthpieces, one every day.

And with these activists goes every hope of ending la misere bosnienne, possibly condemning the country to even greater and protracted agony.

As German journalist and Balkan expert Rüdiger Rossig, now head of DW’s BHS service, once put in a documentary: There are just enough activists left to administer the horrible situation and with their programs to at points alleviate it for some people. There is however no critical mass of activists left who could facilitate any change for the better.

I’m not sure if I entirely share Rüdiger’s pessimism. I probably should. He knows the situation much better than I do.

The fact that Selma leaves Bosnia for a long time, and possibly for good, doesn’t make me any more optimistic, however.

I’m sure, many involved in Bosnia’s corrupt political elite will be glad to see Selma go.

These people never like people who want to improve situations and solve problems. They want to enjoy their power, no matter what and preferably undisturbed by people who care.

Still, Selma’s departure is a tremendous loss for Bosnian society.

It just doesn’t know it yet.