Up In Smoke Or: The Language Thing Pt III 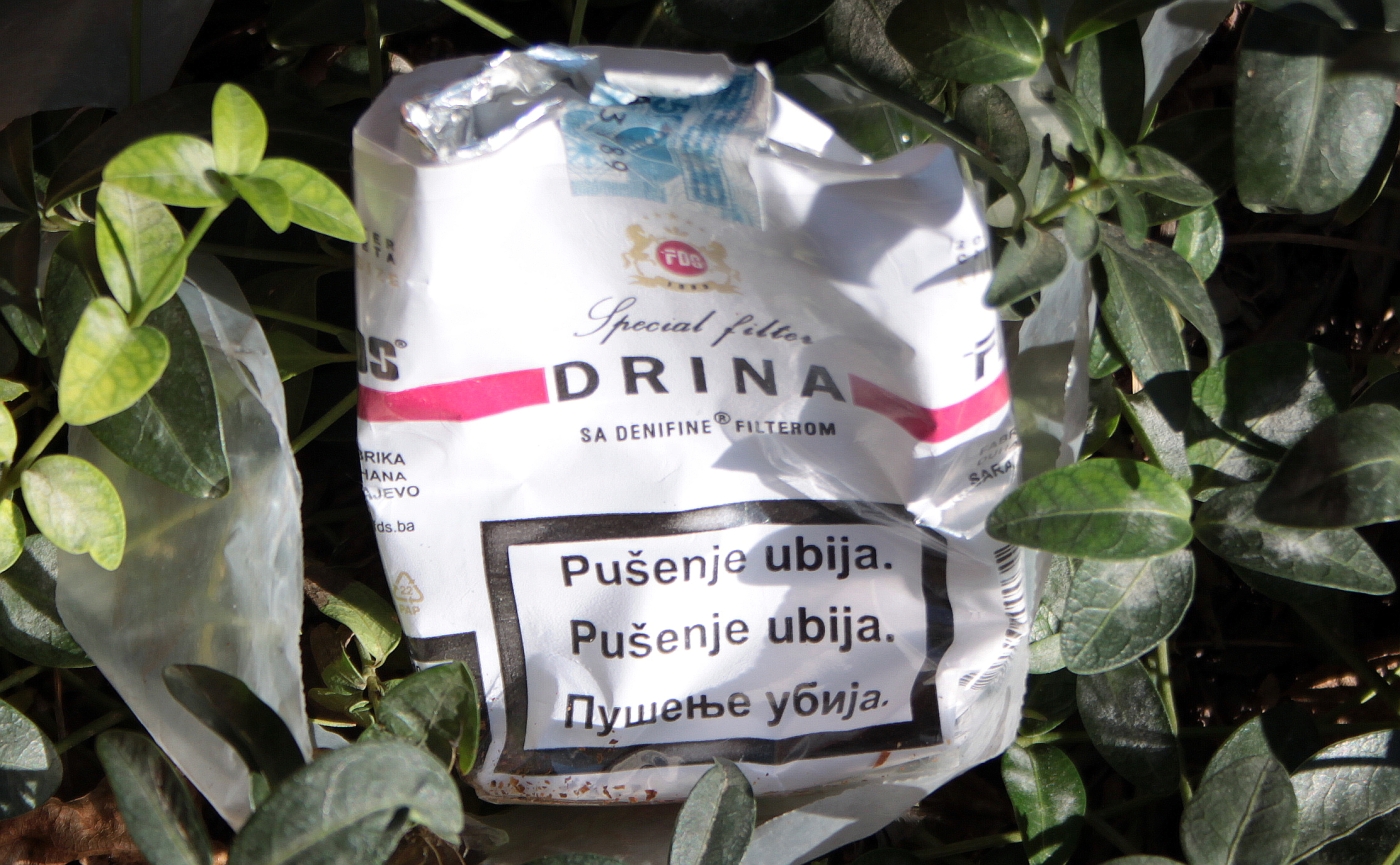 Part III of a series on observations on those minor linguistic differences in the language formerly known as Serbocroatian. Or, in this case, the usual lack thereof. And how a pack of smokes can tell us what’s going wrong with a country.

Nothing shows the mysery of modern day Bosnia as much as a pack of cigarettes.

In this case it’s a pack of Drina, the very own brand of Sarajevo’s tobacco factory. The brand I usually smoke when I’m visiting.

Plus I usually take a carton home. It’s good, strong, cheap and domestic. What more could I want? (There is a Serbian brand called Drina as well, produced in Niš to whom the same characteristics apply.)

The warning notice is in all three dialects of all three constituent nations: Bosnian, Croatian and Serbian.

If it weren’t for the Cyrillic script, with this pack you couldn’t tell which one is which. Usually, as with the front side of this pack, they are identical down to the last letter.

The Point Is Not To Make The Notice Understood By Everone

There are occasional variations where the dialects can be distinguished from each other. Just like Brits use the word „boot“ and Americans the word „trunk“ sometimes a single word will differ in one of the Naški dialects.

The point of the multi“lingual“ notices is evidently not so much to make sure the warning notice can be understood by everyone.

As pointed out previously every Serb can read Latin script as least as well as Cyrillic. It is very probable that every Croat and Bosnjak can read Cyrillic, too, though probably not as well as the other way round. Cyrillic does take some time to get used to.

So one might as well print the notices in just one dialect, alternating, say, every day or so. So still each smoker belonging to each of the constituent nations of Bosnia would get his proper warning.

And given the odd chance he might get a pack in a script he can’t read that smoker might at the very worst rejoice at the idea that this is the one pack in his life that isn’t gonna kill him.

The point is to illustrate that Bosnia is made up by three constituent nations.

On the surface this may look like a nice if somewhat banal idea to get everybody aboard and to soothe nationalists.

On second look it reinforces the nationalist points of view that cripple the country.

If you want to breed nationalists this is just the way to go.

All It Takes To See Is A Pack Of Cigarettes

Too much of a supposed balance between the respective nations is what killed Yugoslavia. It created a sense of entitlement due to ethnicity rather than merit.

On the long run it led to everyone feeling cheated: Nationalists of all ethnicities and nationalities who felt they still didn’t get enough posts/influence and the rest of the country was just a bunch of lazy bones living off them. People who believed in the slogan „Bratstvo i jedinstvo“ (Brotherhood and Unity) and who were fed up that in spite of their efforts most of the time ethnic identity mattered more than anything else. And those who didn’t really care but worked hard and were bypassed by people who didn’t.

This hasn’t stopped with the violent death of Yugoslavia that got more than 100.000 of its inhabitants killed in the process.

It’s continuing to the day. All it takes to see is a pack of cigarettes.

Click here for Part One and Part Two of the series „The Language Thing“.