In terms of sports, Yugoslavia won big last night at the World Cup match Serbia – Switzerland. In terms of culture and politics, it was buried. Strangely enough, Xherdan Shaqiri, one of last night’s undertakers could be the one to resurrect it. He may want to have a serious conversation with his mother first, though.

That Yugoslavia would win last night’s match, was a foregone conclusion. Yugoslavia was playing against itself in the World Cup match Serbia-Switzerland.

So, it won, in terms of sports. In that case, the diaspora version of Yugoslavia was stronger than its remnant version.

In terms of culture and politics, Yugoslavia was buried last night.

One its most avid undertakers was Swiss player Xherdan Shaqiri.

After scoring the 2:1 goal, he triumphed in forming the Albanian double eagle with his hands.

This gesture was meant to provoke the Serb fans – some of whom had apparently shown the „tri prsta“, the Three Fingers, THE Serb nationalist gesture.

(In Vienna, and presumably other cities, Serb fans even glorified the Srebrenica genocide.)

So, while Yugoslavia was having a triumphant comeback in sports, nationalism killed it again.

Incidentally, though, its foremost undertaker Xherdan Shaqiri could be the very one to breathe new life into it.

Shaqiri has Kosovar roots and is an ardent Albanian nationalist. There are numerous pictures to prove that and he wouldn’t be ashamed to admit it.

(Having fled to Switzerland as a kid from the Kosovo war, he is also a proud Swiss. James Montague has a lot of background info. Follow him on Twitter.)

When I saw him cheer, I noticed an eerie resemblance to someone I had briefly met in Beograd two years ago.

And I say eerie. It isn’t just striking, it is almost unbelievable if you think of nationalities in terms of current mainstream narratives, i.e. in terms of at least some genealogical heritage.

The person Shaqiri so much resembles is one of former Yugoslavia’s most popular and most famous actors: Sergej Trifunović.

If someone told me Shaqiri was Sergej’s kid brother or son, I would believe it right away. 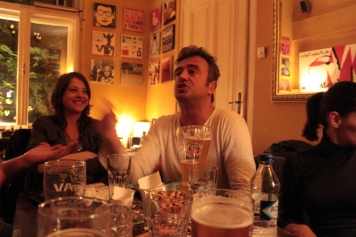 Now, Sergej was born in Mostar and is generally considered to be of Serb ethnicity.

I am not sure if he labels himself and how. He is an outspoken antinationalist and one of the few pillars of reason on the nationalism ridden Balkans people actually listen to.

(There are many people who oppose nationalism and all that’s behind it. It’s just most don’t get a lot of attention. Reasonable people don’t generally provoke all that much and in a world dominated by media logics, provokation is almost the only way to make anyone listen.)

Now, perhaps Shaqiri should have a serious conversation with his mother.

This joke aside, I know how this similarity will play out with nationalists.

What Nationalists Will Make of This

Serb nationalists will claim that this is proof that Shaqiri is really of Serb origin, (Why else would he be such a great football/soccer-player?) just from a long lineage of proud families oppressed by the Ottomans and later the Albanians, forced to take a new religion and a new identity, and what not.

Albanian nationalists might claim the similarity provides ample evidence to say Sergej is really Albanian and just doesn’t know it. (Why else would he be such an accomplished actor?) After all, didn’t Ottomans and Serbs and all the rest oppress Albanians for centuries because they envied them?

What the practically family like resemblance tells us, is something nationalists of neither side would want us to think, though.

Ethnicity Is A Construct

Ethnicity is always a historical construct and has little to do with pure blood lines.

That these two celebrities look so much alike is probably just a really weird coincidence.

Does that mean they couldn’t have common ancestors?

Quite the contrary. If you look at the history of the region, it is indeed quite likely that down the road the two of them share an ancestor or two.

It might explain the similarity. It doesn’t have to, though.

Most likely, these remote ancestors would have had no clear cut idea what an Albanian or a Serb is supposed to be.

Until the 19th century, this didn’t matter all that much on the Balkans, contrary to what nationalist inspired mainstream historiography will have us believe.

There were concepts of Serbdom, Croatness and what not – but they were far more fluid than one might think.

These concepts were shaped by religious affiliation, feudal structures, local proximity or remoteness and other factors.

And, of course, it was no exception that members of various groups mixed and had children.

It wasn’t until the rise of nationalism in the wake of the French Revolution (an unfortunate byproduct of liberty) that also on the Balkans people would start defining themselves in terms of ethnicities and that the dividing lines between nationalities and ethnicities became sharp.

In Bosnia, Orthodox Christians would redefine themselves as Serbs, Catholics as Croats and Muslims struggled for a long time to define an ethnicity for themselves that wasn’t synonymous with their religious affiliation.

That struggle was and is to a degree unnecessary as, particularly in Bosnia, religious affiliation IS synonymous with what’s now considered ethnicity. De facto it is the only distinguishable feature between the main nationalities.

The Lines Are Blurry

All of these groups started to write their own histories, pretending that those sharp lines now distinguishing them from one another had always been there and had always been as sharp.

And of course, they pretended and still do that there never was any inter-„ethnic“ fucking and giving birth.

And that, if it did happen, it was either unvoluntary or if that couldn’t be said that it was at any rate the father’s lineage that counted. (Unless someone famous had a mother from your own group and you wanted your group to shine in that person’s light.)

That being said, one should not presume that before the 19th century there were no Serbs or Albanians and that these peoples have no history.

Of course they existed. It’s just a lot more complicated.

That doesn’t mean that there is no continous lineages in what’s considered ethnicities, either.

Usually, however, it is sub-groups that share common ancestry and define what we consider to be a typical look, for instance.

Yes, There Are „Typical Looks“

And yes, there are these „typical looks“ where you see a person and know with a high degree of certainty where she or he comes from or has roots at.

This is a geographic phenomenon rather than an ethnic one, though, as it often transcends national borders if they happen to run through a region.

There is for instance a certain type of nose where I know: That person has Bosnian roots.

Only few Bosnians have it. It is a feature I’ve seen in Muslim, Orthodox and Catholic Bosnians. I’ve only ever seen in it in Bosnians.

Again, that tells you that to think of ethnicity in terms of common ancestry is pretty arbitrary if not outright wrong.

People from the Dalmatian coast, particulary from the Split region, have a reputation for being particulary tall.

Only few people there are that tall. But those people that are, are immediately being recognized by other Croats as coming from that region.

Then again, people in Krajina look a little different from people on the Croatian coast. In fact, they look like the people from Bosnian Krajina, which is just on the other side of River Sava.

Today, most Krajinians would consider themselves Croats. (Until 1995, there was a sizeable Serb minority in the region who was forcefully removed during Operation Oluja/Spring that ended violent Serb separatism during the Civil War.)

On the other side of River Sava, people would mainly consider themselves Serbs. (Until 1992, there also was a sizeable Muslim and a smaller Croat community in the region who was „ethnically cleansed by Serb troops during the Civil War, with many people being slaughtered.)

Again, this shows how arbitrary the whole ethnicity thing is.

It Shows in My Own Roots

This also shows in my own roots.

I have Austrian-Slovenian, German-Austrian, Czech and Italian ancestors.

I consider myself no less Austrian on account of that. In fact, in that respect I am a very typical Austrian. (Letting aside the fact that it is very hard to define an Austrian ethnicity in the first place. If anything, it is just being not German-German.)

My features are typical Central European.

Whether I’m in Munich, Florence, Budapest, Bratislava or Ljubljana, as long as I don’t open my mouth, most people would take me for a local. I presume, this would still be the case in Northern Croatia.

In Serbia, Bosnia or Montenegro, I stand out. People immediately know I’m a foreigner.

Funnily, in Bosnia people often take me for a Slovenian. I presume it is because I speak some of the language – but not very well – and have an accent they don’t seem to be able to place. As people not from Ex-Yugoslavia don’t usually bother to learn the language at all it would seem a plausible explanation to think of someone who speaks the language brokenly to be a speaker of another Slavic language. Plus I’m blonde which is a feature more often seen in Slovenia than in Bosnia.

And just to think that in Austria was had leading politicians – some of them chancellors – with last names such as Kreisky, Vranitzky, Klima, Rudas, Slavik, Olah and so on.

The Basis for A New Understanding

That being said: If Xherdan Shaqiri starts thinking about how and why he looks so much like Sergej this may be the beginning of a better understanding between the people(s) on the Balkans.

This of course can not undo the monstrous crimes of the 20th century and in Shaqiri’s case not the unspeakable crimes Serbs committed in Kosovo.

But it may put into question the narratives used to legitimize the crimes and to incite people to commit them in the first place.

Without The Balkans, Switzerland Is Nothing

And then there is another spark of hope in last night’s match.

It has shown: Without the Balkans, Switzerland is nothing.

This doesn’t just go for sports.

Immigrants from the Balkans, particularly from former Yugoslavia, are essential for Swiss economy. They are an indispensible part of the country’s labor force.

Unfortunately, they are often not recognized as such.

The Swiss often look down on migrants. They can be pretty nationalist themselves.

Maybe last night’s match makes some of them reconsider.

Copyright of Xherdan Shaqiri’s photo: Stoke City, FC (Name of the photographer not given)

3 Gedanken zu “How Yugoslavia Was Buried Last Night. And Why It Still Lives.”